Bridgette was young, not yet 18 winters old, but was tall and strong. She had a commanding presence and appeared confident in all situations. She had a greatsword strapped to her back, but also carried a longsword and shield.

Bridgette knew she was destined for greatness from an early age. She felt drawn to the Church of Torm and they confirmed that the God of Duty, Loyalty, Righteousness, and Law and touched her. Her powers grew as she trained, but she longed to be tested. She was in Caer-Konig in Ten Towns in Icewind Dale, when the town was attacked by unusual zombies. Although Danto, the town’s cleric of Torm, and his acolytes despatched them easily, it was concerning. Bridgette volunteered immediately to find out where they had come from. Danto was concerned with Bridgettes inexperience and perhaps overconfidence, and so sent another volunteer – Ariel the young cleric of Torm – to go with her.

Bridgette grew up on tales of the paladin Lady Elizabeth, and tries to emulate her in all things.

Bridgette was killed by acidic oozes called Black Puddings in Gal’Nara’s Tomb. Her body has been completely dissolved and cannot be raised from the dead. 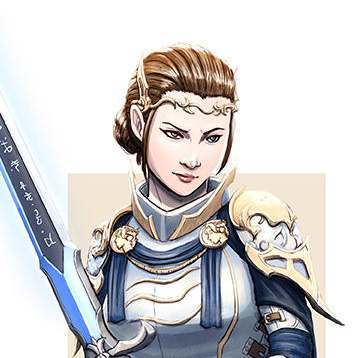