Very big for a halfling – sometimes mistaken for a dwarf – Dave is short-sighted so wears spectacles, in battle wears a cooking pot for a helmet, and a huge collander – sometimes stuffed with vegetables for extra padding – as torso armour, and a huge serving plate as a shield – or used to until he decided to take a level in barbarian!

Dave is part of a duo called The Hairy Riders who travel around Ten Towns, showing off their culinary skills, creating amazing dishes and dabbling with a little magic to make their tender morsels into combat boosters. Dave heard of the starving animals in the Luna Valley, and knew people would be starving as well. “I’m not having that!” he was heard to say, and volunteered to take some of his food to the affected area. He heard that Ten Towns was sending a cart of food and supplies to Tomar’s Crossing and jumped at the chance to join the cart on the journey with his own small, four wheeled cart pulled by his pony, Triumph.

After some time adventuring, the party came to a temple of the Star Elves sun god called Il’Shara’s Retreat. He was taken with the place, and felt it was right he should stay there and protect it until such time as people who could protect it moved there.

The cook class is a homebrew class on the DMs Guild called The Cook Class. 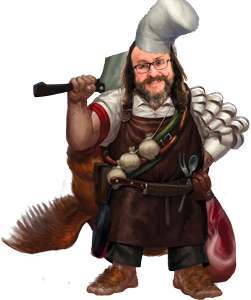