Old enemies get their revenge.

The party left Tomar’s Crossing on another freezing cold day. It was still not as cold as it should be at this time of year, but cold enough to freeze the puddles in the mud. It was also a day almost free of clouds, and the bright blue sky made the party feel almost cheerful. Once again they loaded up their supplies in the wagon and Zhang Thai Shi cast phantom steed to pull it.

They had been travelling for about three hours when the weather abruptly changed. It started to get dark and clouds were suddenly there. The sun was disappearing, not setting, just fading away. Something odd was happening. They continued on looking around and found themselves looking at a pine forest they had not seen before, even though they had been this way several times. The light continued to fade until it stayed at a level of twilight, even though it should have been around midday and the sun should not set for another four hours. 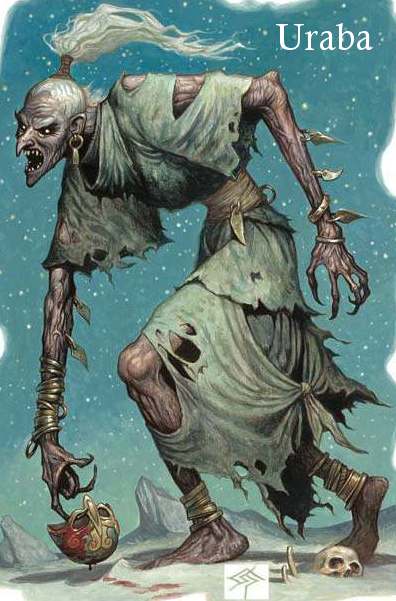 It quickly became apparent they were not in the Luna Valley anymore, and had been transported to elsewhere. There was some speculation it was Ravenloft, except t here were no animals here, no birds, not even insects. Sven thought the terrain looked familiar, the pine forests were similar to where he lived in the north. Soon they came to an effigy – Sven again recognised this from his culture, although such things had not been used for a long time. The effigy animated and attacked, and the party rightly guessed fire would be an anathema to it. They continued on to find an old, run down village that seemed empty.. Sven’s ancestors lived in such buildings, but had not done so for a long time. The biggest building in the village was a feasting hall, and had about a dozen men dressed in archaic dress. The chief urged the party to drink ale with them, and when they did so, all of the men collapsed, and the chief died with a sigh and word of gratitude as their spirits were released. The lights went out and the door smashed open in time with thunder and lightning from outside. Uraba, an annis hag with a grudge against Sven appeared in the doorway, accompanied by werewolves. Battle was joined and the party were eventually victorious through unlikely circumstances. Uraba was causing havoc with the party with her spells, and the werewolves were protecting her. In desperation Guarg activated the demonsword and summoned the demon within. Uraba promptly used a banishment spell on the demon, but didn’t know the sword – now empty – could entrap any creature struck. And so with a slice of good luck when Guarg struck Uraba she was drawn into the sword. The werewolves were quickly dispatched after that and the party could rest.

After the rest the party followed the tracks of Uraba and the werewolves back to her lair – a dismal space under a dead tree decorated with creepy dolls and fetishes. They looted her lair and continued onward to try and find a way out. 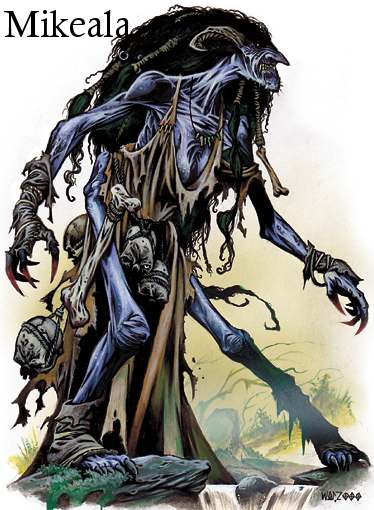 Avoiding a particularly nasty looking section of forest laced with giant, glittering spiderwebs, the party found themselves at an ice lake with an island in the middle that had some kind of building on it. Fog and wind blowing up ice and snow made good vision difficult, and so it was that Mikeala Maggotboots – the night hag that the party had made an enemy of previously – ambushed them. Accompanying her was another hag of Kara-Tur. Her name was Masami and she had a history of conflict with Zhang Thai Shi. Mikeala had obviously delved into their pasts and recruited former enemies. There were also some ice encased blackened undead approaching the party and battle was joined. Mikeala’s plan was to use spells to crack the ice under the party so they would fall into the icy water, but the party made use of counterspells to stop that happening, instead Elinda used a shatter spell to crack the ice under Mikeala. However she had a ring of waterwalking and did not fall into the ice cold water. Guarg charged Masami, Francois kept one of the undead busy. The battle was fierce and both Sven and Elinda were unconscious before being revived. Francios and Zhang Thai Shi took care of the tough undead which were particularly vulnerable to fire magic. Through perseverance and some luck the party turned the tide of battle as the hags used all their best spells which were weathered by the party (or counterspelled). 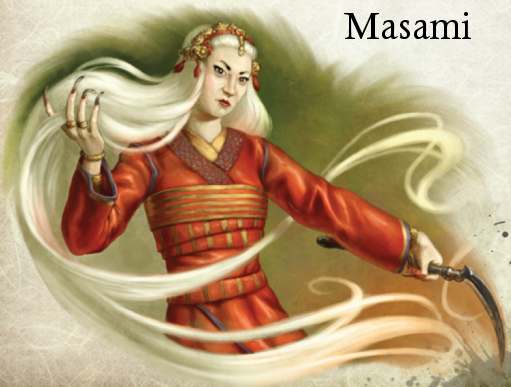 Finally Mikeala fell and Masami sued for peace, stating that if she were to die, then the party would be destroyed as the demi-plane the coven had created together collapsed. Although suspicious the party decided not to take that chance, and allowed Masami to use a ritual to create a portal for them to return back to the Luna Valley.

The party found themselves back in the Luna Valley and no time appeared to have passed. They reviewed what had happened and thought it likely Masami gave them that option because she did not want to die, but also probably would now have access to Mikeala’s treasure. They shrugged and continued on their way towards Margrath’s Prize to face Xancrown.

DM’s Note: – This was a side trek adapted from the adventure The Baleful Coven – an adventure of revenge by Matt Goodall and John Lynch published by Legendary Games. I wanted a dramatic way to wrap up the subplot story arc featuring the villain Mikeala and this fit nicely.