Welcome to The Demonplague campaign. 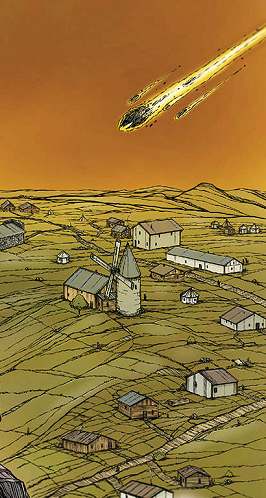 The Luna Valley is in the Frozenfar, north of Luskan, even further north than Ten Towns. It has always been a poor land, covered in ice and snow much of the year, the soil poor and full of stones. The existence of the Ice Tongue glacier in the mountains protruding out into the valley from the mountains meant that even in summer the valley was perpetually cold although most of the snow and ice melted for about three months.

One month before the party arrived in the Luna Valley disaster struck. A giant fiery object from the sky smashed into the glacier to the east, causing earthquakes, great persistent clouds of swirling dust, and also resulted in rocky debris falling from the sky. By far the worst was the flooding from the melted ice which swept through most of the valley, taking with it villages, trees, and animals. The Luna Valley is now mud soaked and strewn with dead and rotting creatures. Safeharbour is a mud-choked ruin. The valley is unnaturally warm and even the persistent ice in the valley has melted. Previously unknown ruins are appearing, uncovered by the flood or by the melting ice.

Those people that survived the flood are trying to find somewhere they can be safe. Some are staying at Safeharbour, hoping for rescue by sea, but are slowly succumbing to starvation, banditry, and the worst of human behaviour. Many other survivors are arriving at the one village not affected – a small community known as Tomar’s Crossing situated atop a small hill and so avoided the flooding. Tomar’s Crossing has been receiving refugees and is struggling to feed them. In addition some of the refugees are telling stories of bandits and goblins attacking and kidnapping survivors. And if that’s not enough, a few refugees – enough not to completely discount the stories – tell of strange monsters appearing in the land, some arising from the mud, some shambling over the changed landscape to attack and rend those unable to escape.

The land needs adventurers to help. Will you answer the call?

Sources Used for this Campaign

by: Trickster61
See All Pages